In my recent piece about Ferguson and so-called “violence” of protestors, I touched on the fact that racists, both liberal and conservative, who don’t value the lives of black people, love to quote Martin Luther King to us, in feeble attempts to silence us when we get too radical for their liking. In that piece, I explained why Martin Luther King’s views on “riots” were complex and why, regardless of what he thought or said, I and many other black people, including many of King’s own contemporaries, simply don’t/didn’t agree with him on many, many things. You can check out that piece, if you haven’t, for my thoughts on so-called violence. Here, I want to talk more about the practice of quoting famous black people to me and other black women to shut us up, and why it’s not only violent in itself, but is also steeped in cisheteropatriarchy.

Yesterday on Twitter, a clueless, melanin-deficient dude wandered into my mentions asking me if I thought educating white people was important. “Don’t you want me to understand you?” the mayo-complexioned man asked, though it was less a question than a statement, really. In his world, making him understand me is obviously something I really, really want and will put endless energy into, no matter how futile, because he, as a random white man, is super important to my freedom or something. He’s the obvious and necessary center of my universe and so on and so forth and etc. My response: “I don’t really care what you understand or don’t understand.”

I told him to go away now, and he did, and that seemed to be the end of it, but psych, no, of course not! Another rando wandered in behind him to quote Mandela (it’s usually King, but this troll switched it up!). 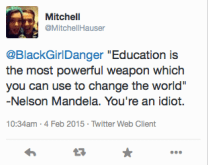 Now, let’s put aside the fact that that quote isn’t about black people, and certainly isn’t about ME, being obligated to teach random white people stuff at their beck-and-call. Although, it obviously isn’t. Let’s also put aside the fact that Mandela was a militant who literally blew shit up in his fight against oppression. What’s fascinating (read: disturbing, pathetic, ridiculous) to me is that so many clueless men of varying complexions (often pinkish, but certainly not exclusively) simply cannot grasp the idea that I am myself.

Not any other black historical figure whose words someone might use, and often twist, for their own benefit in the moment. I am not them. I am me.

I am one of HUNDREDS OF MILLIONS of black people who have their own thoughts, feelings, beliefs and ideals. And when I write or speak—on Black Girl Dangerous, on my Twitter account, at universities across the country—I am speaking as myself about what I think.

There is, however, this expectation for me to bow down at the mere mention of lionized figures like King and Mandela. Part of it is that they’re both “go-to”s for liberals and conservatives alike. Figures who, in death, they can sanitize enough to suit their interests.

But it’s more than just that. It’s also that they are men. Famous men. Straight, cisgender, famous men. And I, as a queer, black, much-less-well-known woman, am expected to agree with and obey every thought they ever uttered out loud or scrawled onto paper.

So, when someone hurls a King quote at me and I reply, “Yeah, I don’t agree,” I can almost hear their face melting off. “You…don’t agree??? That…that’s not how this works!!!!”

It is, though, man-child. It is how this works.

I’m not a straight, cisgender black man. I don’t live in 1955. I’m a radical, queer black woman living in 2015 and my analysis comes from my experience of this world, which is very, very different from the experience of a cisgender black man in 1955. (Also, you have no idea what Martin Luther King would think if he were alive today and could see that, despite all of his work, black people still can’t walk down the street without being harassed at best and murdered at worst by police. But that’s a piece for another day.)

This isn’t to say that I don’t value the words and actions of MLK, Mandela, Malcolm X, or any other black male freedom fighter. I certainly do value them. But as a radical, queer, black woman, my politics don’t always align with theirs, especially in the case of King, but really the entirety of straight, cisgender men people like to quote when they want me and other black women to shut up.

These people never quote black women to me. Maybe because they’d be hard-pressed to find, in the work of brilliant black women, the kind of quotes they can take out of context or otherwise manipulate to try and win an argument that I’m not even interested in having with them in the first place.

That said, there are also plenty of black women I don’t agree with about many things. Because, again, I’mmyself. There’s probably not another black person on earth who I agree with about everything. Which makes total sense if you understand that black people are individual human beings (which, I recognize a lot of you have trouble with from jump. So.)

Few, if any, of these people, who come into our spaces with weaponized cut-and-pastes from Wikipedia, even know that there is so much amazing work by black women. They’ve never tried to find any. Because our brilliant leadership—leadership that has been essential to every black and/or women’s movement in history—just isn’t worth knowing about. It isn’t worth a google search. Even as these people scream “educate me!”

All that time they spent searching for some Mandela quote to use to try and silence and invalidate a black woman, they could have spent pursuing the education they’re demanding in the first damn place, by researching powerful queer black women who have said and done all sorts of amazing shit.

But they don’t know, and they can’t even consider, that black women are autonomous beings with all sorts of bold, interesting ideas of our own. The radical writing and leadership of queer, trans, and non-queer/trans black women has always been erased and invisibilized, while the work of black cisgender men is used to silence us, under the bullshit guise of liberating us from our own critically developed liberation.

It’s really no different from all the other ways black women are invisibilized in movements, including the ways that violence against black women is never mobilized around. They way the killings of Nizah Morris,Rekia Boyd, Aiyana Stanley-Jones, Eleanor Bumpurs, and so many other black women, at the hands of police, aren’t events that inspire uprisings. There are no national marches when we die. Our deaths are treated just as our lives are: as afterthoughts, at best, of black men’s freedom and liberation.

Black women are not afterthoughts. Our words and work are just as important as the words and work of the men whose names you expect us to fall in line at the mere mention of.

Listen: my heroes are Harriet Tubman and Marsha P. Johnson and Audre Lorde and Zora Neale Hurston and Eartha Kitt and my Aunt Franny. My heroes are black women who spoke when men, when the whole world, told them to be silent, who lived by their own rules, who pushed back. My new hero is Rosa Parks, who I always admired and respected and, upon the release of her papers and the new understanding of how militant she was, I now can’t get enough of. My heroes are Toni Morrison and Alice Walker and Chimamanda Ngozi Adichie and Janet Mock. Black women who brave the page, who refuse to be made silent. My heroes are Kathleen Cleaver and Angela Davis and Assata Shakur and myself.

So, no, I don’t place the words of Martin Luther King, Jr. or Nelson Mandela or any other famous man above my own understanding and experience of the world. I value them in the ways that they speak to me, in the ways that they align with my freedom—now, today— and the freedom of other black women—now, today—and I respectfully reject them when they don’t.

So, if someone wants to share a quote because they think I might find it really interesting or helpful or it’s just hella smart or poignant, cool. And if they really want to learn something from me, they can read this, and this and this and all sorts of other boss stuff I’ve written, including entire books about blackness and oppression.

But if they’re hurling quotes at me because they expect me to bow down to them and the other men they think know more about my experiences of the world than I do: they can miss me with that violence.

I can, and will, speak for myself.

White-ish Christmas. Or, Dealing With My Non-Black In-Laws

How to Tell the Difference Between Real Solidarity and ‘Ally Theater’

Boy Story. Or, What Having A Baby Is Teaching Me About Gender

Mia McKenzie @miamckenzie my takes: 1. white people think we're all violent anyway 2. therapy can help you a lot 3. don't start none, won't be none